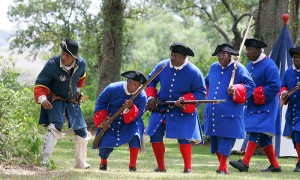 THE “BATTLE OF BLOODY MOSE”

ST. AUGUSTINE, FL – June 12, 2014 – In the early morning hours of June 26, 1740, the village of Gracia Real de Santa Teresa de Mose (mo-SAY), the first, legally sanctioned free black settlement in the continental U.S., became the site of the bloodiest battle in Florida’s part in the War of Jenkins’ Ear. That day saw Florida’s Spanish soldiers, black militia, and native Yamassee auxiliaries locked in a “clash of empires” with invading English and Scottish troops from Georgia, a battle that culminated in desperate, hand-to-hand fighting as FortMose, St.   Augustine’s northern-most defense, burned around them. The decisive Spanish victory at “Bloody Mose” was one of the factors that ended British Georgia’s invasion of Spanish Florida.

The annual Battle of Bloody Mose heritage Event is sponsored by the 501(c)(3) non-profit, educational Florida Living History, Inc., by Fort Mose Historic State Park, and by The Fort Mose Historical Society, in partnership with Viva Florida 500, the National Park Service, and with the support of volunteers from the Fort Mose Militia and other historical re-enactment groups.  Financial support for this Event is provided, in part, by the Florida Humanities Council ( www.flahum.org/ ), the state affiliate of the National Endowment for the Humanities, and the generosity of NTE Solutions ( www.ntesolutions.com/ ).