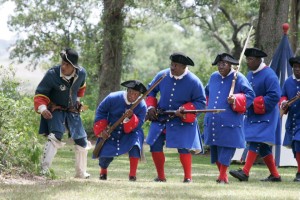 Fort Mose State Park is near the site of its namesake, which was the first legally sanctioned Free Black settlement in what is now the continental United States.  In 1738 the Spanish Governor of St. Augustine ordered the fort and settlement built for the former slaves who had escaped from the British colonies to the North.  The Spanish had let it be known that any former slave who converted to Catholicism and pledged to defend Spanish territory would be free.  By 1738 there were at least 100 free blacks living in the City.

The full name of the settlement was Gracia Real de Santa Terasa de Mose but was known  simply as Fort Mose  (mo-say).

The Park is open every day but Christmas from 9 am to 5 pm.  There is no charge for entrance.  To get there go north on US 1 and, after passing a Wendy’s and Winn-Dixie on your left at a stop light, be prepared to turn right just past two stone pillers with statues.  There is a small brown sign just before you turn on Fort Mose Trail.  After two short blocks this becomes the entrance to the Fort parking lot.  When you park you will see the boardwalk that goes over the marsh and gets you closer to the original site. 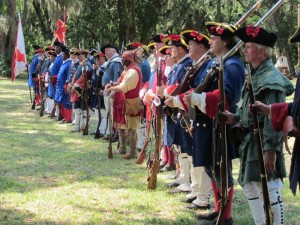 The administration building has rest rooms and water fountains in the “free” area.  The back of the building has an excellent small museum with artifacts and interactive displays that tell the rest of the story.  There is a $2.00 charge for adults and children over 6 and it is well worth the price.

During the British siege of 1740 the British were encamped here.  The Spanish soldiers supplemented by white and black militia companies attacked early on the morning of June 26th and after desperate and bloody fighting killed many and captured the survivors.  This battle became the “Battle of Bloody Mose”  and is reenacted every June.  This first fort was destroyed during the battle. 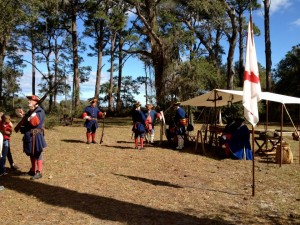 In June they dedicate one weekend to living history and have reenactors there demonstrating cooking and domestic crafts as well as firing muskets and cannon.  The scheduled days are: June 21st – 22nd 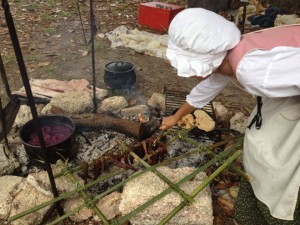 These two Fort sites were lost over the years until rediscovered using infrared photography.  The sites have been inundated and the marsh had swallowed them so that only the footprints have survived.

ST. AUGUSTINE – The Florida Department of Environmental Protection’s Fort Mose Historic State Park, the Fort Mose Historical Society and Florida Living History, Inc. will present the latest edition of its Experience Fort Mose series on Saturday, April 26, from 10 a.m. to 3 p.m.  The event is possible through a grant from the Florida Humanities Council.

Each month offers visitors a fascinating glimpse into life at Fort Mose.. April will focus on the Black Experience in St. Augustine through the years with Fort Mose serving as the ‘starting point’, or the birthplace of Freedom.  A remembrance ceremony will conclude the living history program to honor the ancestors and original freedom seekers at Fort Mose in cooperation with Middle Passage Ceremonies & Port Markers Project, Inc.

Participants should dress appropriately for the weather and bring insect repellent and sunscreen, as the program will be held outdoors. Program is weather permitting.

In addition to the demonstration, the park’s museum and visitor center will be open.  Visitors can watch a 15-minute film on the history of Fort Mose and its residents, as well as learn about the site through the interactive museum exhibit.

The entrance fee into the park’s visitor center is $2.00 per person. Children under 6 are free. For event details, please contact Tonya Creamer at (904) 823-2232. For additional information, visit www.floridastateparks.org/fortmose.