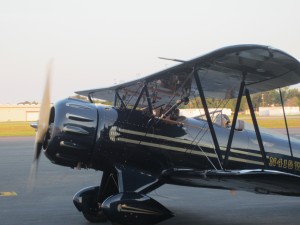 Captain Dave in the back and two passengers

So what does a ride in a open cockpit biplane feel like? Imagine driving down a scenic highway  strapped in a high end convertible sports car. Now imagine that car lifting off and ascending over the intracoastal waterway as you pass 1,000 feet in the air with the incredible view unfolding beneath you.

That is the closest comparison I have for the sensation of being in the cockpit of a 1935 Waco biplane.  We met Captain Dave Genet and his wife Veronica on a recent warm summer night at the St Augustine airport for a thrill of a lifetime. Dave taxied the plane over to the two passengers on the tarmac and we spent some time going over all the details of our flight.

The biplane itself is a work of art. While it looks like something perfectly restored from the 1930’s, it was built  actually brand new in 2011. The biplane is  newly  built Waco with the Original FAA Type Certificate, which deems it the real deal. It is manufactured by the Waco Company out of Battle Creek MI. And the plane does look like it just rolled off the production line. It sat on the runway gleaming. The cockpit featured  antique wood trim around the instruments and leather padding around the cockpit edges. The quality of this plane makes you feel at ease instantly. Both cockpits are capable of flying the plane but luckily Dave had removed the joystick from our front position.

Dave makes you feel completely relaxed and thoughtfully answers all questions. He is genuinely interested in making you comfortable and informed about the flight ahead. After 10 or 15 minutes discussing the ins and outs of our sunset flight, it was time to squeeze into the front passenger cockpit. It is a tight fit for two people but once strapped in, you feel completely secure. 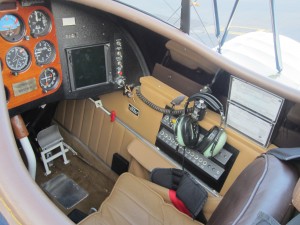 We put our headphones on and taxied out to the runway, Dave zig zagging so he could see what was ahead of him. We taxied into position and were quickly cleared for takeoff as we could hear over the headphones. Within a few seconds we were “wheels up” and starting our ascent. The dark green marshes of the intracoastal quickly unfolding beneath us. We continued to rise with the warm summer night air blowing all about us. We have a “windshield” so most of the breeze was above our heads and it was not very loud with our headphones secured on our heads.

My pulse seemed to quicken with our increasing altitude. I glanced at the instrument in front of us (two passenger  the front cockpit and pilot Dave in rear). The Vilano bridge loomed ahead and the inlet was gleaming in the sunlight. The Schooner Freedom was in full sail as it passed Porpoise Point. The setting was incredible. My head was whipping around in all directions. I felt like a little kid who could not decide what to focus on. Already my mind was saying I had to do this again. The skyline of downtown was coming into clear view as we approached the bay and the Bride of Lions. Every sense seemed heightened as we banked around the city now 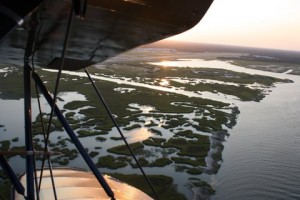 with each building unfolding right beneath us…the Fort, Flagler College, The Presbyterian Church all seen from an eagles eye.

We banked again, this time steeper and it seemed as if the wing tip was now pointing directly at the Bridge of Lions. Although I have some fear of heights, I felt secure strapped into the seat, too immersed in the fantastic view to allow any notion of fear to  arise. We headed out over Anastasia Island now as boats streamed down the intracoastal bathed in the glow of the setting orange sun. The Conch House marina slid beneath us as we headed towards the beach and Anastasia State Park. The sand and the surf seemed like an abstract painting below us. The pier seemed very quiet with only a few people frolicking in the surf. We turned again and descended down lower to 500 feet for a close-up view of the sea and the State Park. The Amphitheater ahead looked like a Circus tent in the distant and not a 4,000 person concert venue. 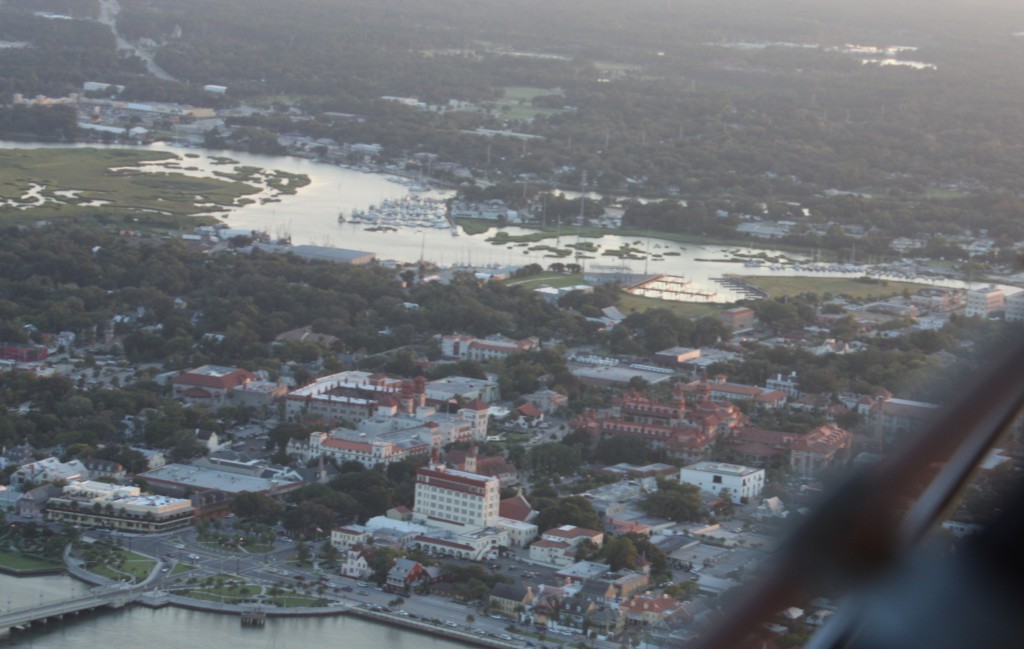 I snapped pictures in every direction and felt torn as whether to be a photographer or spectator. I did not want to miss a thing and could not take enough of this scene  in for fear of missing another amazing sight from my perch. We approached the inlet again with the Schooner heading back to port. Dave said “they are waving at you down below” over the headphone and then gave them an old “barnstormer” wing wave back. The sight of the schooner in the inlet, the sun setting in the background and the light dancing off the waves was like a Hollywood special effect. “Pinch yourself” I thought. 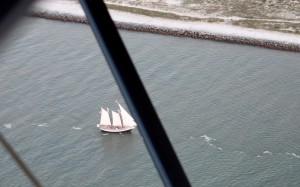 We headed back north towards the airport. I had no idea how long we had been airborne. Thirty minutes? Five minutes? Time stood still and raced by at the same time. We headed straight down the intracoastal with the small strip of Vilano Beach to our right. We started to pass the airport and headed over the Guana Preserve. The sun was now very low in the sky…a burning orange sinking ball. I looked down at the deep green marsh grass set against the dark waters. A number of pink spoonbills and egrets flew at an angle below us. It was like a living National Geographic special except you were in the middle of it. We flew over a house that seemed to  be in the middle of the marsh. My head whipped around trying to figure out how anyone accessed the house and could detect a road heading towards Route 1. I looked ahead and saw we were approaching the airport from the north. I knew my short  life as a soaring bird would soon end and glanced all around me for a last panoramic view. Our descent was slow and smooth….actually I did not even realize that we had touched down until Dave crackled “two wheels down” over the headphones.

As we taxied back to the hangar I realized my adrenaline was still coursing through my body. I was still high on my high as we crawled out of the cockpit and down the wing. “How was it?”, Dave asked. “Wow” was all I could muster at this point. “Phenomenal.”

I have been lucky enough to fly in almost every type of plane…single engine, turbo props, gliders, helicopters, Lear jets, luxury jetliners. However, nothing compares to the feeling of that cockpit. The openness, the wind, the sun on your face….the sheer audacity of it all. It is you and the sky (and thank God Captain Dave.) Combine all that with the stunning beauty that is Saint Augustine from the air. The marshes, the ocean, wildlife, historic downtown, the desolation of the State park….now throw in the setting sun on a warm summer night and you have a thrill of a lifetime….a true bucket list check off. 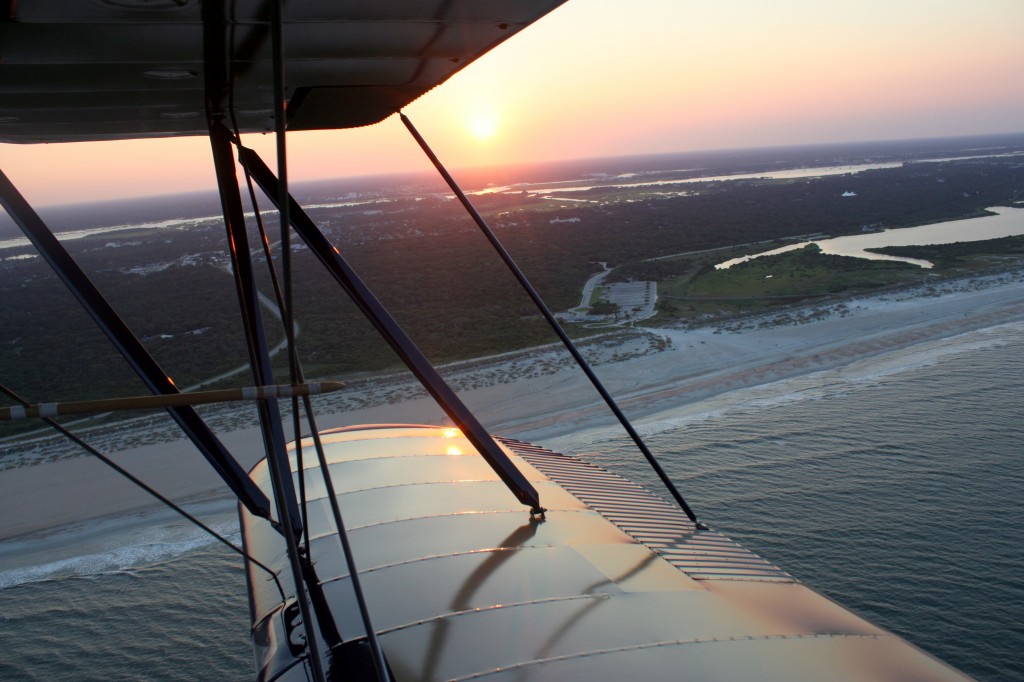 A few things surprised me…the feeling of security…the speed of only about 85 miles an hour…the combination of peacefulness with awe. At least for our ride it was not bumpy at all and the air turbulence was  minimal behind the windshield. I could only imagine the old “barnstormers buzzing town and landing on the beach “back in the day”.

So my advice is if you have  a chance…..DO IT! Introductory flights start at just $60 person (2 person minimum) but if you can do it, try the “Barnstormer” ($137.50) because I can tell you that once you are up there, you will not want to come back to Earth anytime soon.

Also, check out their video for more information and another perspective.

And thanks to one of our sponsors, HafcoVac, a manufacturer of industrial vacuums and explosion proof vacuums for making this possible